I Have a Right to Healthcare 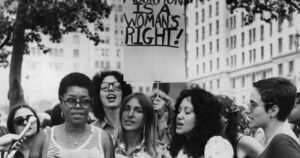 On June 24, 2022, I lost a fundamental right to make my own healthcare decisions.  On that day, America reminded me once again, that my body is not my own.  The Supreme Court’s decision to overturn Roe vs. Wade reversed more than 50 years of progress in women’s healthcare.  This decision essentially made our reproductive organs property of the state and has sentenced some of us to death.

This may sound melodramatic, but it is not. If the past is any guide, ending the right to abortion will spark a public health crisis by increased maternal deaths and greater health inequality overall.

According to the Center for Disease Control, Black, American Indian, and Alaska Native women are three times more likely to die from pregnancy-related complications than white women. Many of us no longer now have a choice.  We cannot choose between terminating a pregnancy or dying because of carrying and/or giving birth to a child.  The American College of Obstetricians and Gynecologists condemned the ruling, saying abortion is a “safe, essential part of comprehensive health care” and “must be available equitably to people, no matter their race, socioeconomic status or where they reside.”

I am mortified by the fact that this ruling will not reduce the number of procedures, but it will reduce the number of safe procedures and increase maternal mortality rates.  According to the Journal of American Medical Association, deaths from illegally induced abortion declined between 1940 and 1972 in part because of the introduction of antibiotics to manage sepsis and the widespread use of effective contraceptives. Deaths from legal abortion declined fivefold between 1973 and 1985 (from 3.3 deaths to 0.4 death per 100,000 procedures), reflecting increased physician education and skills, improvements in medical technology, and, notably, the earlier termination of pregnancy. The risk of death from legal abortion is higher among minority women and women over the age of 35 years and increases with gestational age. Legal-abortion mortality between 1979 and 1985 was 0.6 death per 100,000 procedures, more than 10 times lower than the 9.1 maternal deaths per 100,000 live births between 1979 and 1986[1].

Returning to illegal backroom abortions and self-induced abortions will result in an increase in deaths for women.  Equitable health care is a human right and access to safe abortions is health care.  The court’s poor decision is a direct blow to health equity, patient safety, reproductive health, and bodily autonomy.

This isn’t a political issue; this is a human rights issue.  So, what can we do as spiritual care providers in light of this decision?  Here are a few suggestions:

[1] Induced termination of pregnancy before and after Roe v Wade. Trends in the mortality and morbidity of women. Council on Scientific Affairs, American Medical Association. (1992). JAMA, 268(22), 3231–3239.

About the Author: Kim Lessner