Thanks to our cadre of supporters at the Catch the Fiesta Gala.  If you would like to make payment for your paddle raise, please call 312.563.4825 and speak with Cherryl. For online donations, please select our red DONATE NOW button, and in the notes box indicate that your donation is for the Catch the Fiesta Spirit benefit.

The nursing home administrator was taking me around on my first day as a chaplain. The first resident I met was Brian, a paraplegic from an auto accident some 20 years prior – a week after graduating with honors from University of Texas. Brian was a passenger and the driver was killed. I visited with him for a time, got up to leave and said, “Brian, it’s nice to see you.” Brian, in a thin voice but with eyes that locked into mine quietly said, “Nice to be seen.” Those four words are the key to my chaplain and pastoral care ministry.

Cherryl Holt is Chaplain at Stroger Hospital, and Associate for Chaplaincy and Development at Bishop Anderson House.

The mom and dad were outside their child’s room on the PICU (Pediatric Intensive Care Unit) at Stroger Hospital.  Medical folks were surrounding the bed.  I walked up to the parents and introduced myself as the chaplain on the unit.  Silence.  “Is this your child?” I asked.  The mom gave a chilly, “yes,” and she remained very standoffish as I continued to ask questions.  The patient was Mark, 7 years old, experiencing abdominal pains.  I pulled out a Teddy Bear and gave it to her saying, “Please give this to Mark for me.  And please tell him I’ll be praying for the doctors and nurses to find out what is wrong and do what they can to heal him.” As she took the bear, her entire demeanor began to change.  The expression on her face softened and her body relaxed.  As I walked away, she called me.  “Chaplain.” I turned around to see a smile on her face.  “Thank you.”

Scott Baeseman is co-chair of the Fine Arts Department of the Lake Forest Country Day School, as well as police chaplain for the Highland Park Police Department (HPPD), and in charge of pastoral care at his home congregation.

Scott’s entrance into the world of chaplaincy magnifies the hand of God in the world. After being received into the Episcopal Church, Scott began searching for a new ministry. “I wanted to minister to those on the margins,” he said, “I wanted to be available for people who needed support that weren’t as obvious to the general public.” Scott’s predecessor at the HPPD suggested police chaplaincy to him. In his capacity as police chaplain for the HPPD, Scott cares for the families of victims at crime scenes, accompanies officers in notifying families of victims, and provides pastoral care for officers and their own families.

In considering the effect his ministry has on his own life, Scott had the following to say: “My own spirituality grows through each encounter. There’s a deep sacredness in sharing these moments with the people whom I serve. Some of the most profound experiences I’ve had have been through tragedy and disaster while still recognizing the holy stillness that accompanies the presence of God. God doesn’t arrive in the fire, the flood, or the earthquake.  Rather, he comes in that still, small voice of silence when it is all over. As a chaplain, it’s a gift and it’s a privilege to be in the presence of that sacredness.”

Sally Hedrick is a member of the Winter 2015 Lay Chaplain Training Program and a pastoral care volunteer at Burgess Square Nursing & Rehabilitation Facility in Westmont.

As had become the custom each Tuesday evening for my first three weeks, I was visiting folks at Burgess Square Nursing and Rehabilitation Center based on a list of residents who “could use a Pastoral Care visit.”  My initial trepidation with not having any background information about the particular needs of the residents had begun to ease into some measure of peace that I would be used where there was a need – and I did not need to know the details.  The resident I chose to visit on this particular evening was a woman who I had seen frequently at our Morning Prayer or Communion Services that St. Andrew’s offers at Burgess Square each Sunday morning.  I had not seen D.C. for a few months, so a visit seemed like a good opportunity to check in with her.  As D invited me into her room, I could immediately sense that she was not well.  She was dressed in pajamas and sitting hunched over in her wheelchair.  Always known for her ability to articulate thoughts and feelings, D apologized for not being presentable, and then began to tell me a story.  Within a few moments, it became clear to me that her words were not making any sense, and that I could not even find a common thread of a topic in the words she was speaking.  I listened for a few more minutes, and nothing changed.  My questions to her went unacknowledged – I was unable to reach her.  As I wondered about how else we could connect, I pulled out my iPad that I had loaded several old hymns onto.  I chose “In the Garden” as the first selection, and invited her to sing along with me – and she did!  D stopped, made eye contact with me and smiled.  We sang three more hymns, and then I told her that I should say goodnight and let her get some rest.  She turned to look at me again and smiled.  “Thank you!  Will you come back?” she asked.

Our experience that evening was a powerful reminder to me that the Lord can make His presence known in some rather surprising and profound ways – and it need not always be through a traditional conversation. 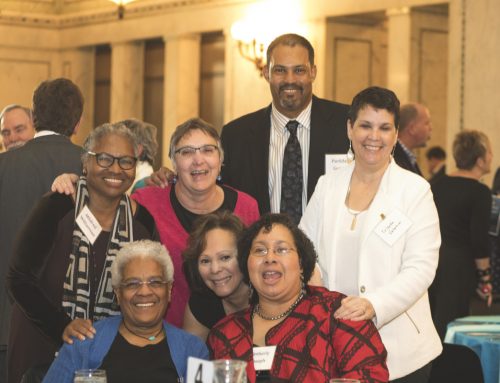 The Art of Healing 2017 Gallery

Use Amazon Smile to Benefit BAH

Use Amazon Smile to Benefit BAH 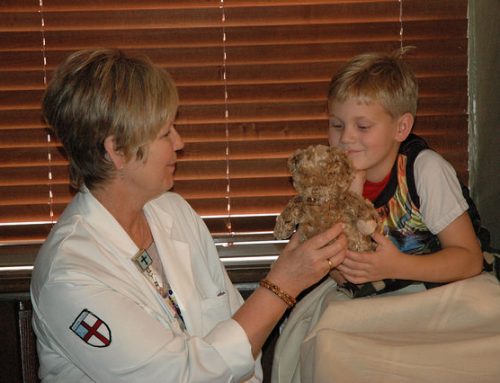